Mr. Jezic’s wins in high-profile criminal cases have been featured in many news articles and on national TV shows, including Dateline NBC, Dr. Oz, and the Tucker Carlson show. Mr. Jezic has received nearly 100 percent of very positive reviews from scores of clients.

Maryland criminal defense lawyer Andrew V. Jezic served as a Maryland prosecutor for nearly eight years, prosecuting some of the most serious felony cases in Montgomery and Anne Arundel counties. Mr. Jezic is a past president of the Maryland Criminal Defense Attorney’s Association. In 2017 Mr. Jezic was honored as one of the "Most Influential Marylanders" by the Daily Record, Maryland's preeminent legal and business newspaper. 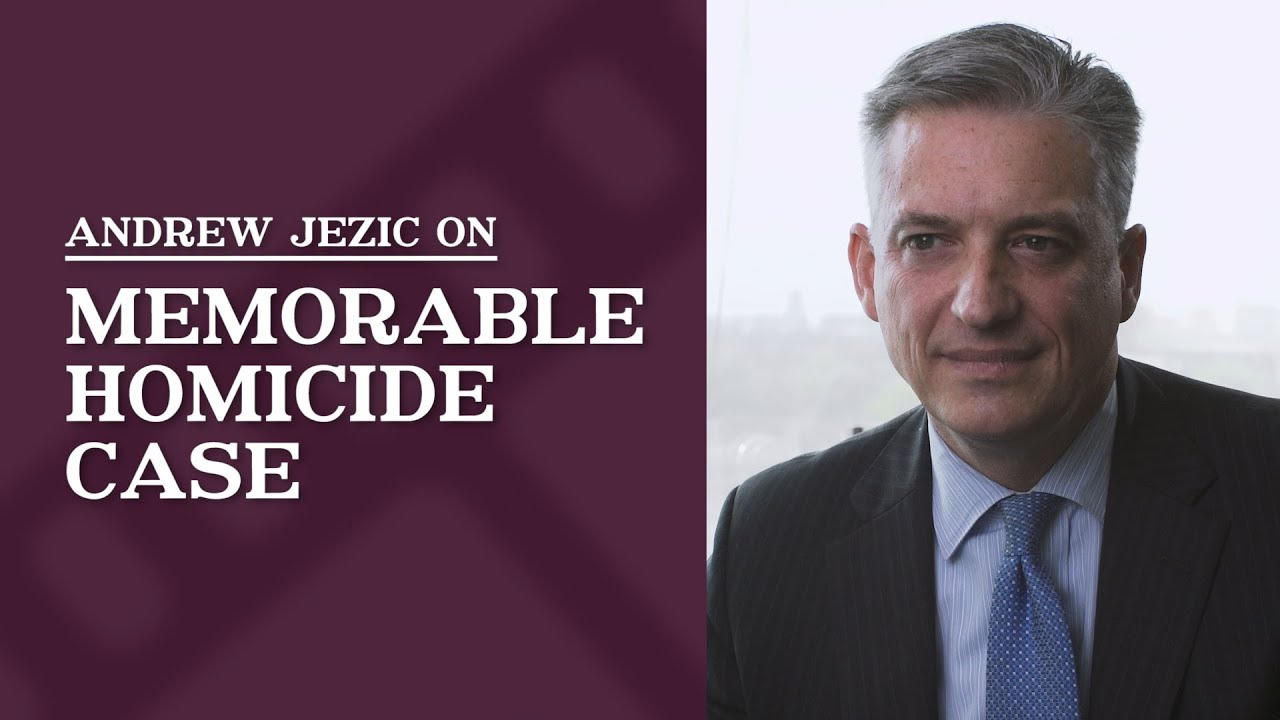 As a Maryland criminal defense lawyer, Mr. Jezic aggressively represents defendants around the state and in Washington, D.C. facing such serious charges as murder, rape and armed robbery. In his 27 years as a litigator, Mr. Jezic has handled over 120 jury trials and 95 homicide cases.

Mr. Jezic’s primary focus is winning - a Not Guilty verdict or a dismissal. Otherwise, his goal is to get a result that most would consider to be beyond expectations. To this end, Mr. Jezic has built an astonishing record of success in winning jury trials for his clients: 87% of all his jury trials as a defense attorney have resulted in some type of win for the client - a Not Guilty verdict, a hung jury, a mistrial, a windfall deal in the middle of trial, or a New Trial granted by the judge or appellate court.  As an example, Mr. Jezic has not lost a child abuse jury trial in Montgomery County in 14 years (14 jury trials).

Mr. Jezic has been selected to three of the most prestigious organizations for any trial lawyer, reflecting his reputation as one of the leading criminal defense attorneys in Maryland.  First, Mr. Jezic is a Fellow in the American College of Trial Lawyers, an invitation-only group of the leading one percent of trial lawyers in each state.  Second, he is a member of the Trial Court Nominating Commission for Montgomery County, which is the final vetting organization for judicial candidates, passing a streamlined list on to the Governor.  Third, Mr. Jezic is a member of the Maryland State Bar's Criminal Pattern Jury Instruction Committee, which drafts the final language of the official jury instructions given at the end of a criminal trial.

Three other achievements highlight Mr. Jezic’s status as the “go-to” criminal defense attorney in the state for the highest profile and most challenging cases.  First, Mr Jezic is a co-author of the widely respected book, Maryland Law of Confessions, first published in 2003 by Thompson/West and now in its seventeenth edition. Mr. Jezic’s 1600-page book has been cited or quoted in twelve reported opinions by Maryland’s highest and intermediate appellate courts. Judge Charles E. Moylan, Jr., a scholar on Maryland criminal law, wrote in a published opinion: “The leading academic authority on confession law in Maryland is Jezic, Molony, Nolan and Woodward, Maryland Law of Confessions.” Second, Mr. Jezic frequently lectures to lawyers and judges on confession law around the state, including two lectures to judges only at their “Judicial College”.  Third, Mr. Jezic is often called upon as an expert in criminal law to testify in court and in front of the Legislature in Annapolis.  Most recently, he was hired as the criminal law expert by the Attorney Grievance Commission for the disciplinary proceedings against a formerly elected county prosecutor who was accused of multiple ethical violations.

Mr. Jezic has won many acquittals and dismissals in high-profile and serious felony cases. For a small sample of these success stories, please see the link to Recent News.

In 2021, Mr. Jezic convinced a Howard County jury to acquit his client of all charges in a homicide case in which the client was accused of killing his own son (read article).

In 2018 in a murder case in Washington County, Mr. Jezic achieved an acquittal on all murder and attempted murder charges (read article)

Mr. Jezic also won a Not Guilty verdict on all charges in a murder case in Prince George’s County, after a three-week trial, in November, 2018.  (See Washington Post article). 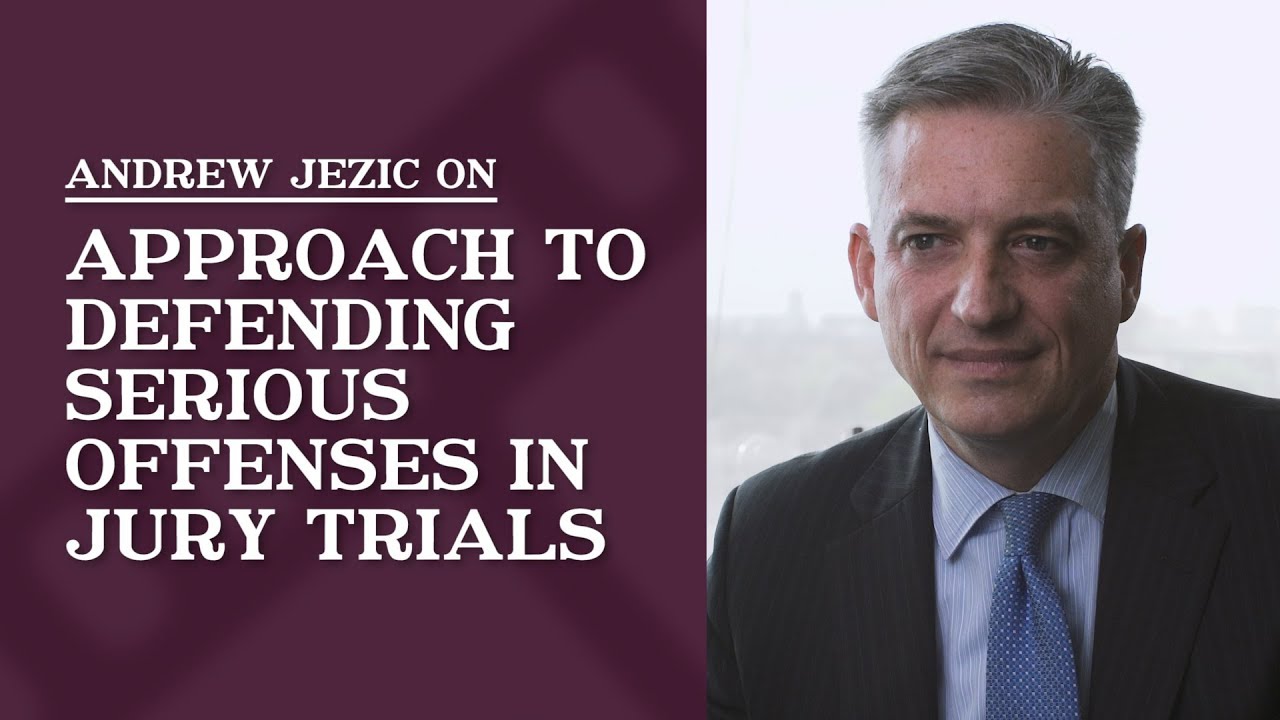 In 2018 Mr. Jezic represented one of the most critical witnesses in the FBI’s investigation of the Supreme Court nominee, and now Justice, Brett Kavanaugh.

In 2017, after a grueling three-week murder trial, a Montgomery County jury was completely hung after 17 hours of deliberation, giving Mr.Jezic's client a chance to fight another day for an acquittal (Washington Post). 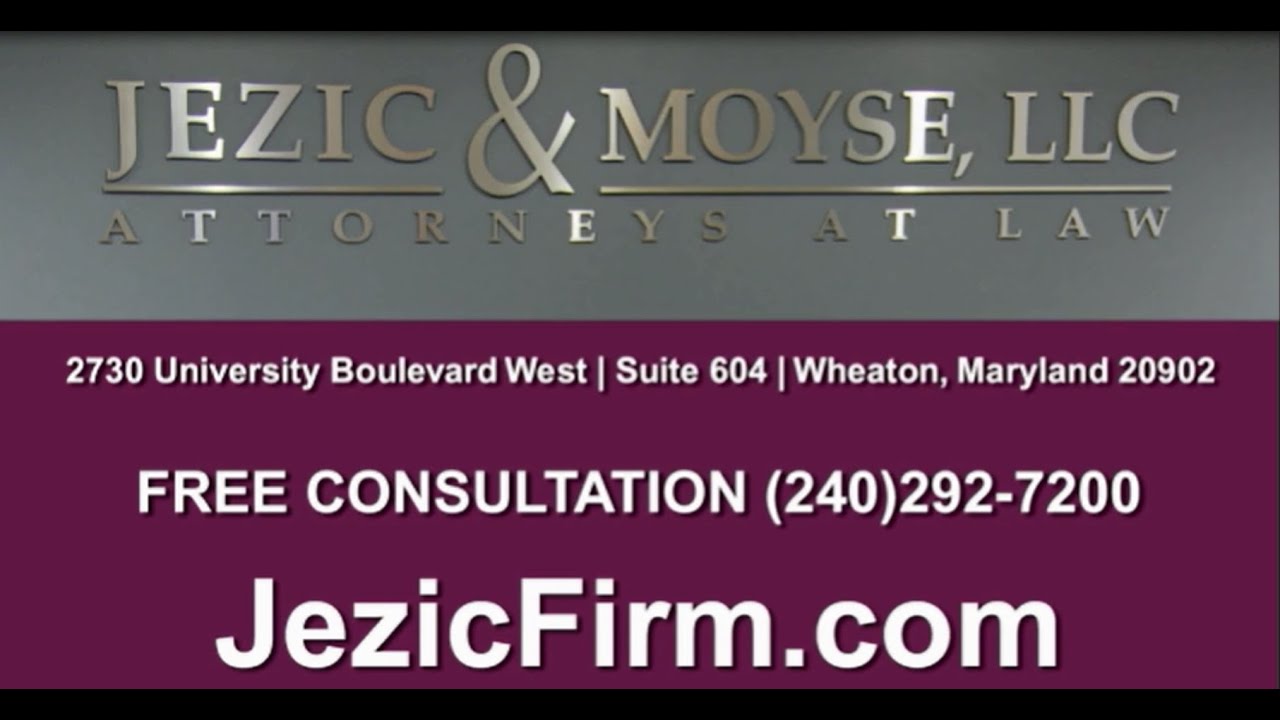 “If you are in a bind and need legal experience Jezic & Moyse is hands down who you want in your corner. When I first met Mr. Jezic I was facing false murder charges with no bond. From day 1 facing a very long and stressful process of 3 years dating back to 2018 the Jezic & Moyse team has been there every step of the way. I highly recommend Mr. Jezic he’s very determined to get you the best outcome possible while also educating you along the way. I assure you Mr. Jezic never steered me in the wrong direction and was very easy to stay in contact with if I had questions or doubts. With all that being said I was acquitted of the charges and now able to continue a normal life with my fiancé & children. So again I thank Jezic & Moyse for there hard work and dedication it will not be forgotten. I highly recommend this law firm. I highly recommend Mr. Jezic.” -Pierre Queen

"I was represented by Mr. Andrew Jezic in a Jury Trial for a Criminal Case that turned my life and the lives of my loved ones upside down in the blink of an eye. Mr. Jezic’s cross examination of the State’s witnesses was a perfectly strategical set of questions to uncover the truth. Observing Mr. Jezic’s ability to unmask the State’s witnesses and hear them contradict themselves, was the perfect display of his knowledge, many years of experience , professionalism, and passion. And to finalize, his closing statement was truthful, genuine, sincere. From the beginning until the end of the case, I could not only see but also feel Mr. Jezic’s genuine and absolute true concern for me and my familiy’s future. […] His constant communication with me and my family through every step of the case made us always feel that he was there for us. His  words of guidance and moral support kept me on my feet at all times. - Orlando Coffield

"Andrew Jezic was retained based on the recommendation of a highly respected attorney who stated “as a prosecutor going into a jury trial the last defense attorney I would want to be looking at is Andrew Jezic”. Magnificent Person Formidable Attorney. Andy surrounded me with the finest group of people including Gary Smith and Matthias Meuwissen who with his leadership upheld their professionalism, knowledge, ethics, and compassion for my wife and I through the worst time of our lives. Everyone wants to win, but Andy and his team are willing to work tirelessly to prepare to win for you. Andy is an attorney who conducts himself as a gentleman at all times who will turn into a shark for you if it is appropriate. At the end of the jury trial, I was acquitted of all charges. I was asked if Andy was as good as I thought he would be. My response was I had no idea that good existed." - Stephen Tucker

The jury found me NOT GUILTY on ALL charges, including:

1st Degree Murder of my husband of 25 years

I owe so much for all the hard work my lawyers and their team did to get this case done on the first try. I live again as a free woman due to all their time, commitment, and tenacity.

The aftermath of being detained without bond for 17 months is such a mentally and physically horrendous ordeal to endure, especially when you have been wrongly accused. Mr. Jezic came and gave me the realistic reasons to stay calm and reassured. That honesty and guidance helped get me through this nightmare. Everyone as a combined force worked for a defense that showed the truth – I am innocent of the murder of my husband.

Mr. Jezic’s brilliant cross-examinations brought out the truth, and his two-hour closing argument was a true masterpiece. After hours of deliberation, I heard the jury say those two magic words, “NOT GUILTY”, on all counts, and I got my freedom and life back. God Bless.

In 2017 Mr. Jezic achieved success for a client in one of the highest profile cases in Montgomery County in decades - in the "Rockville High School Rape" case - guiding his client through a maelstrom of national media attention, including pejorative comments about his client from White House spokesman, Sean Spicer.  Contrary to all expectations and hype, all rape and sex offense charges against Mr. Jezic's client were completely dismissed (See Post article).

In 2017, Mr. Jezic convinced the prosecutor on the eve of a jury trial to completely dismiss all sex offense charges against his client. (See Post article)

In 2015, a jury watched a videotaped interrogation of Mr. Jezic's client, during which the client all but confessed to the crime.  After a six-day trial, the jury rendered a surprising verdict, acquitting Mr. Jezic's client of all charges. (See Post article).

In four different jury trials, after Mr. Jezic’s tough cross-examination of the State’s main witnesses, prosecutors gave up and dismissed all charges in front of the jury.

In 2010, prosecutors in two separate jurisdictions dismissed the cases against Mr. Jezic's clients, after the jury in each case had heard Mr. Jezic's winning cross-examination of the complaining witnesses (See Post Article). Remarkably, yet again in 2012, prosecutors dismissed all murder charges on the third day of a jury trial in Prince Georges County, after the Jezic team's vigorous investigation and opening defense. (See Washington Post article).

In 2015 the prosecutor in Prince George's County dismissed another serious stabbing case on the third day of the jury trial after Mr. Jezic's cross-examination of numerous eye witnesses.

In 2010 and 2011, Maryland criminal lawyer Andrew V. Jezic convinced judges in two separate cases to vacate his clients' guilty pleas, entered with another criminal defense lawyer, whereby both clients would have been deported after serving lengthy prison sentences. In both cases, Mr. Jezic's clients were eventually exonerated, on the felony charges to which they had plead guilty, after jury trials and are now free of any threat of jail or deportation.

In one of those cases in 2011, State v. Cuque, the jury acquitted Mr. Jezic's client of all charges despite having viewed a videotaped confession by the client (See Gazette article).

Mr. Jezic's most well known case is the successful defense of Gary James Smith, in the "Army-Ranger murder case" - another of the most high-profile cases in Montgomery County in the past several decades.  Mr. Smith was a Sergeant in the Army Rangers, having served in five combat tours in Iraq and Afghanistan.  He was accused of murdering his fellow Army Ranger, a close friend and roommate in Gaithersburg.   After two lengthy trials, and two appellate reversals, Mr. Smith successfully ended his case with time served and unsupervised probation, eight years after the original arrest.  Mr. Smith now is a law clerk in the law offices of Jezic & Moyse, working on Mr. Jezic's various murder cases. (See many articles) from 2006 to 2015, and see hour-long show about Gary Smith on Dr. Oz.

As a Maryland criminal defense attorney, Mr. Jezic has taught full semesters at the Law School of American University and also at Montgomery College.

Mr. Jezic was appointed by two Governors in 2006 and 2007 to be one of five members to serve on the State Board of Elections in Annapolis. He is the former co-Chair of the Montgomery County Bar Association's Criminal Law Section. As Chair of the Maryland Hispanic Bar's Judicial Interviewing Committee for eight years, he was responsible for interviewing all applicants in the state for any judicial vacancy.

Mr. Jezic is fluent in Spanish.